League of Kingdoms is a massively multiplayer blockchain game that runs on the Ethereum blockchain. If you have played Rise of Kingdoms or Game of Thrones Winter Is Coming, the chances are that you will notice there are some similarities in the gameplay of these games and League of Kingdoms.

The game is centered around building kingdoms on LANDS that players own. The ultimate goal is to develop a strong kingdom, build alliances, and progress in building levels and research to raise an army for combat against your enemies.

If you aren’t very familiar with blockchains and crypto wallets, getting started with blockchain-based games can be a bit confusing. However, you don’t need a MetaMask wallet or Ethereum (ETH) to start playing League of Kingdoms, and the good thing is that the game can be played on your mobile phone or PC.

Let’s take a look at some of the features of the League of Kingdoms game.

If there’s anything that can take you ahead in League of Kingdoms, it’s forming alliances with others in the game. When you start playing the game, you are protected from outside attacks through a 72-hour protective shield. But once the shield ends, things can get messy. 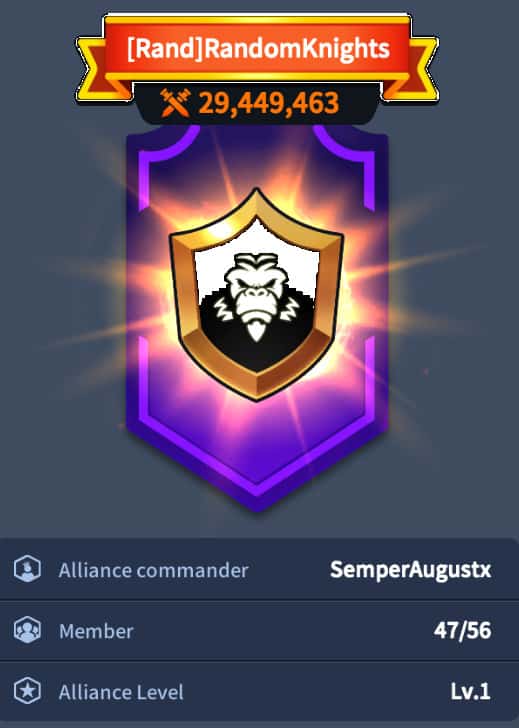 Being a part of a strong alliance can not just save you from enemy attacks, but they allow you to socialize, build together with others, and go on collaborated rally attacks against other players. 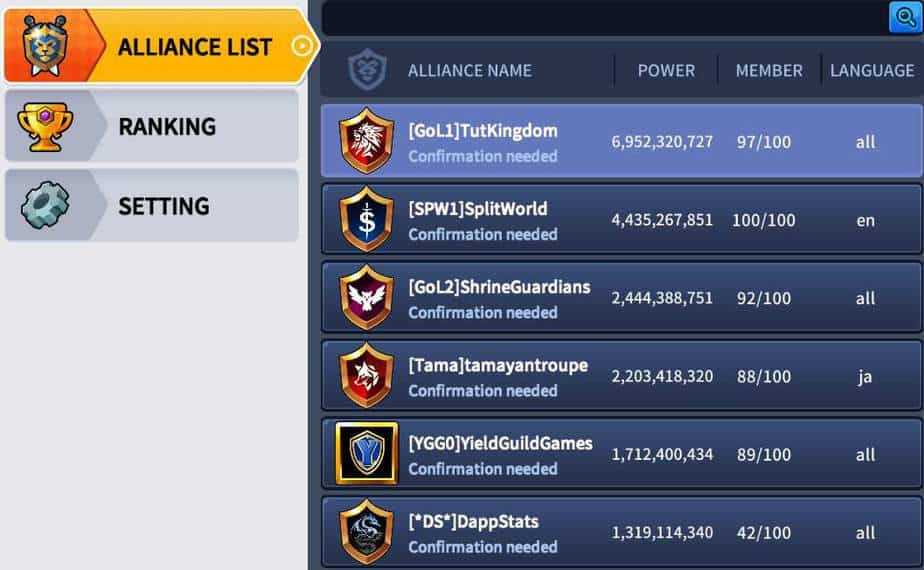 Alliance members work as a team with an end goal of acquiring a Shrine, an in-game place with rewards like boosted health for different units, speed, and reduced death rates.

Every two weeks, players compete to capture shrines that are either unoccupied or under the control of another Alliance. Depending on the shrine’s tier, players can spend million to several million troops to defend against invading enemies. 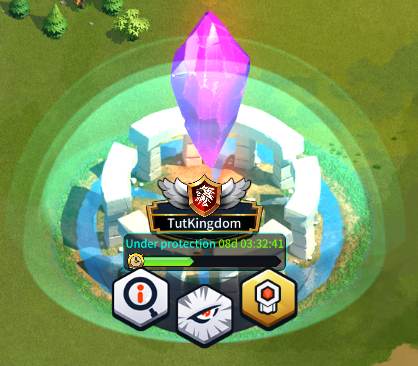 Every player starts off with the main castle in a primitive kingdom that needs to be developed and upgraded. Players have to fortify their main castle to protect against external threats and strategically utilize different buildings like barracks, markets, and research to progress in the game. 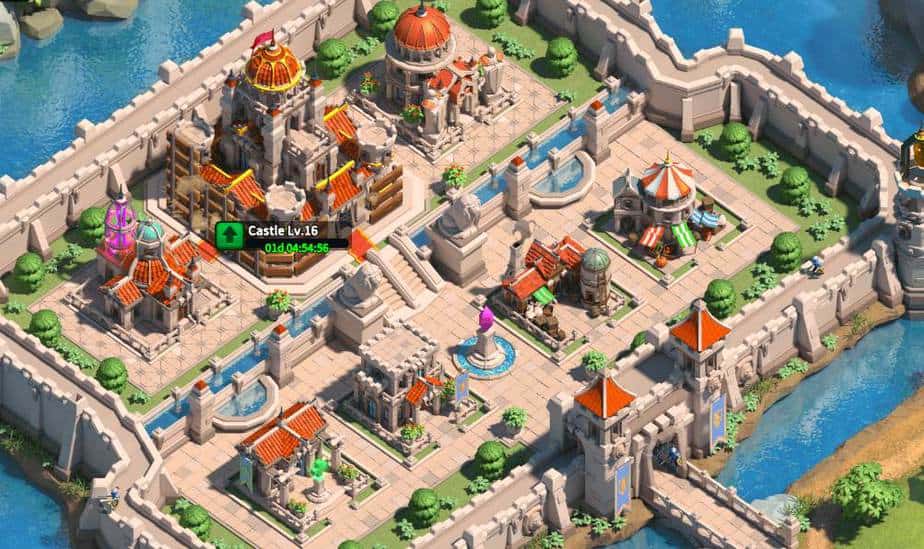 To establish a strong kingdom, you will have to gather resources that can be extracted by building things like lumber camps, gold mines, farms, etc. Your allies play an important role in the development of your kingdom. They can press a help button to reduce the time taken for the completion of a building. Or you can use speed boosters to lower the time.

Each building can be upgraded to a maximum level of 30. When you upgrade to the final level, you will need a Golden pillar that can be bought using crystals.

When you collect 100,000x of resources on a LAND, the LAND earns a development point, meaning you can further upgrade your LAND and grow your kingdom.

All the resources can be mined by playing the game except Crystals which players can get through a purchase.

LANDs and Other NFTs

LAND is a virtual real estate non-fungible token on Ethereum in League of Kingdoms that players can own, trade, sell and build things on. All kingdoms basically function on LAND. 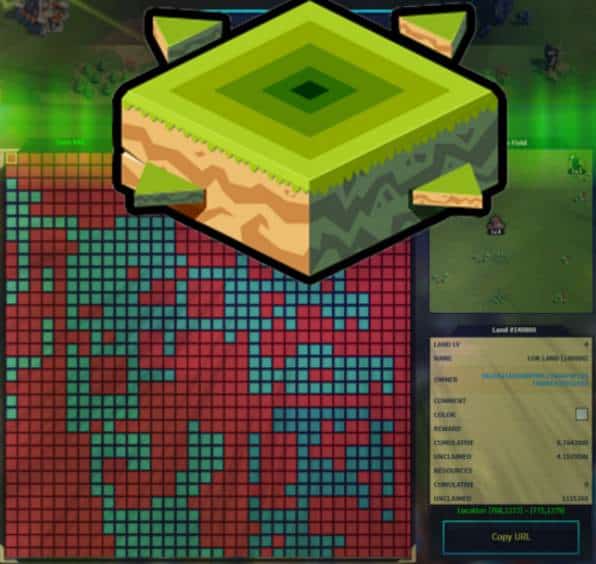 Through smart contracts on Ethereum, players can get rewarded for owning NFTs and playing the game. Landowners can earn daily DAI rewards from their LAND NFTs and reinvest that money to develop their kingdom further.

To be successful in the game, landowners must develop their lands and work with other players who can play on their lands and earn rewards in return. Since players can play on one another’s lands, the game encourages everyone to contribute to the ecosystem and build social networks. 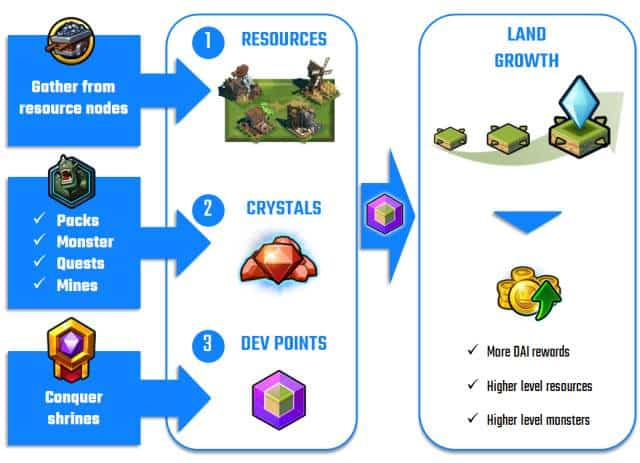 This game also gives its players complete ownership of their in-game items like lumber, food, stone, and other things. Players are allowed to sell these items on the OpenSea NFT marketplace to others who are in need of these items. 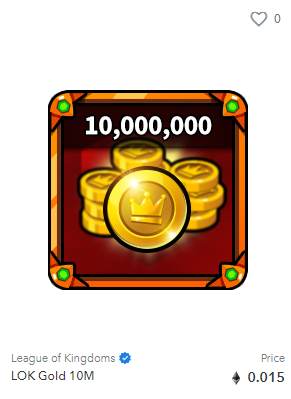 However, there is a slight downside to this: players have to pay gas fees to mint their tokens and list those on the OpenSea platform. The gas fee issue is being addressed and players can now mint their NFTs on the Polygon blockchain (Beta) . 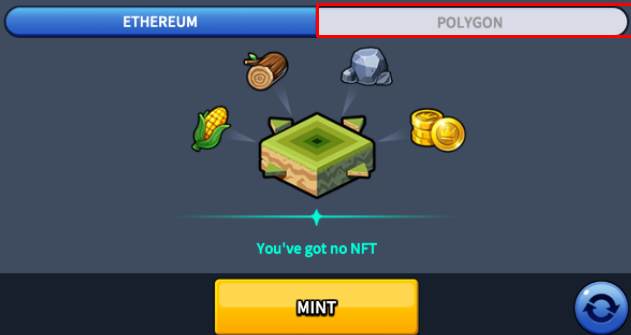 League of Kingdoms allows players to participate in battles against real players or monsters to gather rewards and loot. Players can attack each other’s cities and plunder each other’s resources.

Players can join forces with their friends through Alliances to fight against others. Alliances are not only useful for attacks, but they are equally advantageous when your kingdom is under attack.

During player-vs-player battles, troops from both sides fight each other. Fighting can result in casualties and injuries to any side’s troops, depending on their strength. Moreover, one player can take away the other’s resources and even raze the other one’s kingdom completely. 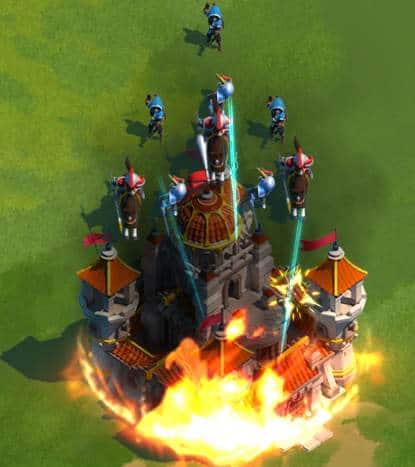 Moreover, the game offers daily quests and tasks for players, which they can complete farming resources like lumber, corn, gold, and stone.

The Continental Congress consists of leaders who are elected by the Alliances to make important decisions and govern the entire continent. Congress will make decisions regarding game rewards, dividends, and many other things related to the game.

Although League of Kingdoms is based on a similar concept to many other strategy games, what sets it apart is that this game is built around the Ethereum network. Unlike other MMO games, League of Kingdoms empowers players by giving them complete ownership of their in-game assets.

Players not only own their game assets, but they can sell or trade them with others for crypto on the Opensea marketplace.